Atticus Finch said in To Kill A Mockingbird “You never really understand a person until you consider things from his point of view – until you climb into his skin and walk around in it.” He is explaining to his daughter, Scout, that we mustn’t judge another person until we have experienced what they have been through.

I would like to think of myself as the magnanimous, understanding person Atticus was referencing,  but I know I fall short.

He does not mean the people you feel sorry for or empathise with. He is talking about people you — without knowing it — have judged…or misjudged.  The people you would normally find the hardest to relate to, the least likely you can understand. Not someone who is poor or disadvantaged, living in poverty or worse. Although that would be hard to fathom, that is something that most of us would want to do to understand the difficulties that person faces. That is the definition of empathy. This is not an easy path, but I think we assume this is what Atticus is talking about. Whereas the shoes of someone whose values you do not like, whose causes you don’t believe in, whose doctrines are not ones you subscribe to — those are shoes far harder to step into.

For me, it would be very hard to walk a mile in the shoes of an Islamic terrorist. I would not understand them, nor want to understand them. And that’s where I fall short. I would find it very hard to walk in the shoes of a racist. A member of the Ku Klux Clan or even some of the Afrikaners we met while living in South Africa.  I would really bristle to walk in the shoes of a serial sexual harasser. Or worse, someone who abuses and rapes women.  Politically, I do not completely understand Brexiteers. And I find it very difficult understanding Trump voters. I cannot fathom that they see Trump as someone who will save them and the country.  I struggle with all these things.

But, isn’t the point that we do attempt to understand the opposite point of view? That we do try to listen and deconstruct it? You do not – at all – have to agree with it. But I would love to sit with a Trump supporter and really have an explorative, educational exchanging of views. Bridge the gap between us.  If we could discuss where he/she is coming from, how they arrived at this place in time where they felt the only answer was voting for a former TV-celebrity billionaire with no experience in government and no record of helping others, that would be a start.

I want to understand the racists whose views were formed from a young age. How did they arrive to the bias they so clearly have? When living in South Africa, we met Afrikaners who rolled their eyes and said things like “Well, your blacks aren’t like our blacks” as if we were merely discussing the difference in primary schools or bad restaurant service when in reality we were discussing racial tensions in the US and South Africa. I was appalled. I found myself judging. “How can they be so overtly racist?”

My husband pointed out to me that the woman we were speaking to had a completely different background and upbringing to us.  Economically, we were probably similar to her, and around the same age, but that’s where the similarities stopped. We all grew up in the 70s but in South Africa there was state-run media and the government controlled all the information that was fed to the public. She did not see the international news stories about the fatal youth uprising in Soweto or they were told a very different story – one that was far from the truth.  They didn’t have televisions in most of the houses and farms until well into the 70s, Pink Floyd’s The Wall and other outside media was banned countrywide, and they heard about things blacks were doing to whites through the filter and skewed POV of a scared white minority government.  They were 12 or 14 years old at the time whose parents told them the government was right.  My husband pondered were we to be born in South Africa with parents of a certain generation and the government lying to us, with a media machine in place to counter anything we might have heard, would we have turned out any better? I don’t know.

Of course, we would all like to think we would have seen it — would have sussed out the racism and inequalities and known about the apartheid system to keep blacks uneducated and seen the injustices. But would we have? Really? I don’t know. It was then that I realised I had judged them and found them lacking. I had gone to anti-apartheid rallies in the 80s. I bought the single “Ain’t Gonna Play Sun City” by international musicians who took a stand. I followed Mandela’s release and cheered when he won. But wasn’t it me who was lacking? If I couldn’t take away all the freedoms and education and bias that I was brought up with to see what kind of person I might have been had I been born in Pretoria rather than New York, aren’t I close-minded? I am assuming I’d be the better person, but I don’t know that.

I find the art of listening is lost on this narcissistic social media world we live in. So I would love to know whose shoes are the hardest for you to walk in. Whose point of view do you really not understand? If we could all listen to each other, sit for a spell, exchange points of views, come to some sort of understanding – with respect for each other – wouldn’t we be a better world for it? My New Year’s resolution is to do just that: I will try to listen more, judge less. Join me? 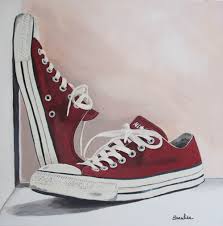